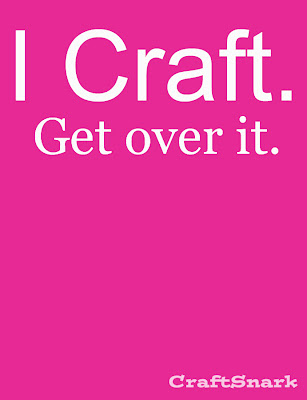 I'm a Crafter. I Craft. And I have no problem with the words Craft, Crafting, or Crafter to define me and what I do.

The "Culture Desk" at the New Yorker might not agree. To Alexandra Lange, the journalist who wrote the article, because I'm not a skilled workman, I use ModPodge, and not everything I create has an apparent use (other than just be pretty) I'm the trifecta of un-craft-ness.

It seems that titles are like URLs. All the good ones are taken. 150 years ago, the word "craft" was taken by artisans who were anti-industrial and used romantic, medieval, or folk styles. Therefore, in the eyes of some, the word craft cannot be used by those of us who love factory-made products like ModPodge, Martha Stewart paper punches, and pre-cut wooden forms. And especially not by those embracing styles like chevrons, ombre, and putting a bird on it.

According to the top online source for all things factual, Wikipedia*, many other words in the English language have altered their meanings with time. "Awful" used to be a positive word (break it down - Awe - full... as in "full of awe"). Ask anyone who lived through the 80's and they'll tell you that "bad" is a compliment. And the most well known change in our language is that of the word "gay."

We speak a language that has changed so much that we offer 13-year-olds need side-by-side translations of Shakespeare in order to understand the most basic levels of these works. Why can't this same world be one where creating a felt wreath makes me worthy of the term "crafter", without demeaning the craftsmen and women of yesteryear?

I'm not the only one with opinions about the word Craft. See what some other Craft Bloggers have to say:

*Wikipedia is also where I got my information regarding the Arts and Crafts Movement.
Posted by Carolina at 12:38 AM