This is the second in a series on DIY vs Craft. Check out the introduction post on Get Your DIY Elitism Out of My Face. 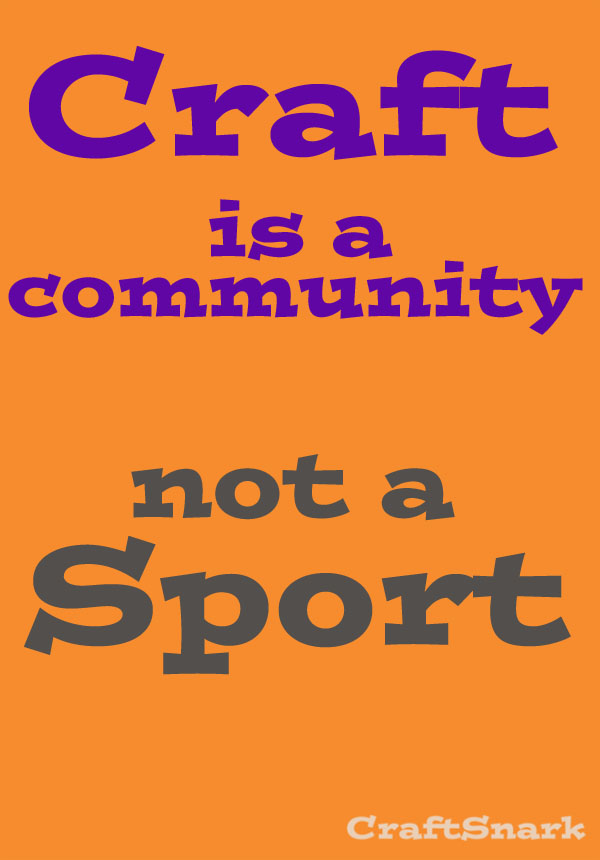 When you look up craft in the dictionary, you learn that craft is an art, trade, or occupation requiring special skill, especially manual skill: the craft of a mason.

If you use this definition, then the word craft is overused. The term “kids craft” is an oxymoron – how can something be an occupation requiring special skill, yet be designed for a child to accomplish?  The word craft has been hijacked to equally apply to woodcarving and popsicle stick crafts. I understand the frustration – even though there are some pretty sweet popsicle stick crafts out there.

I take offense when those who present themselves as DIYers decide to shun the word craft and all who use it. They treat craft as if it were a dirty word. They look down on anyone who uses craft to describe themselves, as if calling yourself a crafter means that you spend weekends with your seven cats working on puffy paint sweaters and plastic canvas projects. And even if it did mean that, there are some awesome puffy paint sweaters and some amazing plastic canvas projects that take serious skill.

Really, the problem arises when you have a gigantic group of people who can all define themselves the same way. A very generic statement would be to say “I know Karate”. Lots of people know Karate. But you don’t put someone who didn’t get past their White Belt on the same playing field as someone with a Third Degree Black Belt. But, Crafts doesn’t have degrees. And they don't have issuing agencies to test and confer degrees. So we all use one generic word to describe a cacophony of ideas.

If using the term DIY is a way to give degrees to crafting, it is being done wrong. There is an entire segment of the "DIY Community" that shuns the word Craft. To them the word is smut. They mock the word, and in doing so - all who accept it.

A black belt doesn’t look down on the white belt. A black belt encourages and uplifts the white belt. Coaches them. Trains them. A white belt is a black belt in training. The group of DIYers who are shunning the word craft are ostracizing those who define themselves as crafters. They are assuming their place in a nonexistant heirarchy. Craft is a community. Not a sport.

More on this next week…

Email ThisBlogThis!Share to TwitterShare to FacebookShare to Pinterest
Labels: craft definition, I hope we can still be friends, snarky thoughts, you're welcome